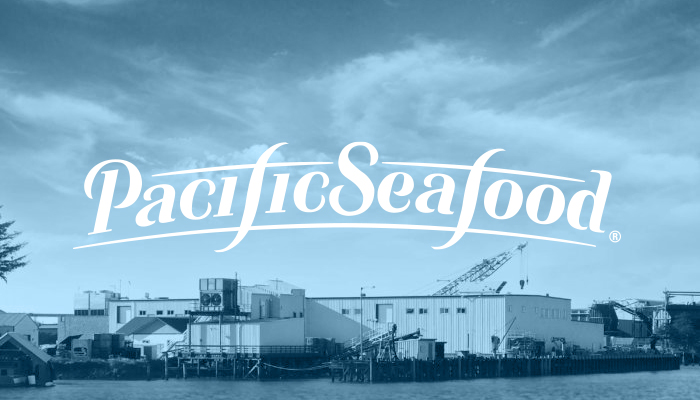 The original processing facility, built in 1941 and acquired by Pacific Seafood in 1983, burned down in 2013 along with the dock. It was the largest employer in Warrenton providing more than 100 full-time jobs as well as up to 100 seasonal jobs. Pacific Seafood’s Warrenton Team, headed by General Manager Mike Brown, scrambled to relocate the facility temporarily to Astoria in seven days, in what became known as “the seven day miracle.” As part of its ongoing commitment to its employees, Pacific paid everyone even during the downtime.

“It’s a proud day to see this new state-of-the art facility,” said Dulcich. “We have invested significantly in this new facility to make sure that Oregon’s seafood industry will be stronger than ever. Our new facility and dock will support hundreds of team members and their families with living wage jobs including health care and a profit sharing retirement benefit. We will provide a market for up to 70 independent commercial fishing vessels to deliver their catch and grown their business while improving our market access—many of which are ported right here in Warrenton.”

“I’m hard pressed to think of a bigger achievement than being one of the 62 team members who have stayed with us since the fire,” said Dulcich.

Dulcich also recognized the “incredible” support from the community including Senator Johnson and the coastal legislators, the governor’s office, Business Oregon and former Mayor Kujala and current Mayor Balensifer and the Warrenton city council.

The event concluded with an inaugural offloading of Pacific rockfish, one of the species to be processed at the plant, from the F/V Pacific Conquest.

“Pacific’s investment will help ensure that seafood continues to be one of the largest contributors to net earnings in Clatsop County,” said Senator Johnson. “Oregon’s rural and coastal communities have not experienced the same economic growth enjoyed recently by our urban centers. State government needs to do more to support coastal industries like seafood processing and encourage the significant economic and social benefits that they provide.”
The activity at the dock will provide a boon to state and local government including an estimated $220,000 annually in landing fees to Oregon’s Department of Fish & Wildlife.
The plant is also leader in environmental sustainability, using a first-of-its kind technology to clean waste water while also conserving water. Pacific Seafood is the first seafood processing facility on the west coast to use this new, more environmentally friendly technology in a seafood processing plant and we hope it will prompt other companies to make similar investments.

About Pacific Seafood Group: Founded in 1941 by Frank Dulcich, Pacific Seafood remains a family-owned and operated company dedicated to providing the healthiest protein on the planet. Pacific Seafood manages all parts of the supply chain from harvesting/fishing, processing, and distribution to provide customers with fresh, sustainable, and high-quality products. Pacific Seafood Group is headquartered in Clackamas, Ore. It employs more than 3,000 team members across 41 facilities in 11 states.